On the heels of their second-place finish in January’s Rolex 24 at Daytona, drivers João Barbosa, Lance Willsey and Yann Clairay battled through contact, transponder issues and a decided lack of racing luck to bring the No. 33 Sean Creech Motorsports Exelixis Ligier JS P320 home in fifth position.

A myriad of issues plagued the team through the course of the 12-hour, 329-lap endurance classic. From an ill-timed full course caution that inadvertently led to a drive-through penalty to damage incurred under the yellow flag, the team was unable to catch the break that could have been the difference between getting its second straight podium or ruing what might have been. The team, however, was able to take plenty of positives from its debut in the endurance classic (while Creech and much of the team have been racing for several decades, 2021 marks their debut in the WeatherTech series.)

Willsey took the green flag in sixth position and quickly settled into a rhythm. He engaged in a spirited fight for third position with the No. 74 Ligier in the early laps, but a quick spin in Turn 7 late in his stint put him down the running order. Barbosa took over at the two-hour mark and the two-time Sebring winner quickly powered the Ligier into third position with his eyes on the front of the field. 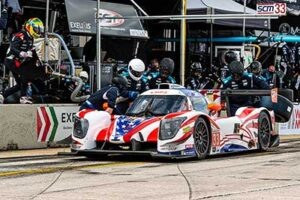 The team was poised to bring Barbosa into pit lane for service when a full course caution came out for a car stopped on course. Per IMSA rules, the team was allowed to come into the closed pits for “emergency service” but a miscue on the subsequent pit stop procedure cost the team a drive-through penalty. Barbosa came in to serve the penalty which put the team a lap down.

Clairay, racing at Sebring for the first time, had his own share of drama. Just over the seven-hour mark and battling for position, his opponent did not see Clairay overtaking and the two made contact in Turn 16. The Frenchman did a masterful job to control the Ligier, avoid other cars and get back underway without losing a position. Willsey returned behind the wheel but during a full course caution was hit from behind by the No. 11 LMP2 car, causing damage to the rear diffuser that hampered the car’s pace. The team quickly effected repairs on the next pit stop which added time to replace a faulty timing transponder, with Barbosa taking the wheel as the sun began to set.

Barbosa kept the car in contention through his double stint before handing it off to Clairay, who also held his ground. Barbosa returned to the wheel to take the checkered flag, his 13th Sebring 12 Hour finish, in fifth position. Barbosa also set the team’s quickest race lap, a 1:56.340, on lap 169.

“It was a very disjointed race,” said Barbosa. “Nothing clicked. We had good pace but there were little things that put us behind, and we never had a break to catch up – though in a 12-hour race, you would think you would have enough time to make it up. It’s frustrating, but the team did a good job and the car was good. It didn’t help that Lance got hit in the rear which affected our pace. But every time something happened, we were out of position – we didn’t catch a break. I’m still trying to understand exactly what happened, I want to go back and watch the race, but it’s frustrating and a disappointing finish. The team did a great job preparing the car, we’ll just focus on the next race.”

“The car was perfect this morning, one of the best set-up LMP3s I’ve ever driven,” said Willsey. “At least it was until I got hit. The No. 11 LMP2 hit me so hard under yellow that it lifted me up off the ground and ripped up the diffuser. I don’t know if he wasn’t paying attention or what, but there’s no excuse for hitting someone under yellow. The team did a great job, but we just had too many little mistakes. I had a spin, we had a drive through and all those little things took their toll. We fought back, but we’ll regroup and see what we can do differently. My co-drivers were plenty fast enough to get us on the podium, but we just didn’t have luck on our side.” 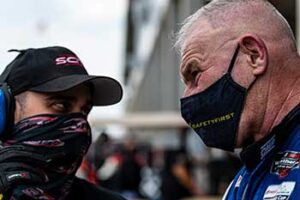 “I was overtaking another car and he didn’t see me and closed the door,” said Clairay. “We touched, but luckily I was able to recover. I wasn’t happy with my pace today and the damage didn’t help. But the team did a great job. This was a crazy race. The track is very hard as is the traffic, but I really enjoyed my first time here. I’m glad we were able to finish, though I know we were capable of having a stronger result.”

“We just couldn’t catch a break today,” said Team principal Sean Creech. “The penalty – we were coming into Turn 17, ready to head to pit lane, when the yellow came out. We’d have been in and out with no problem had we been a couple of seconds ahead. We had transponder issues, which we’ve never had before and then Lance gets hit under yellow. The crew did a great job, as did the drivers, and the car was fast – the entire LMP3 field did times that were so close, so the speed was there. Just no luck.”

Sean Creech Motorsport will return to IMSA action at Mid-Ohio Sports Car Course on May 14-16.