But an early drive-through penalty put the car a lap down and despite a valiant effort, the team had to settle for a fifth-place finish in Round Four of the 2021 IMSA WeatherTech SportsCar Championship. 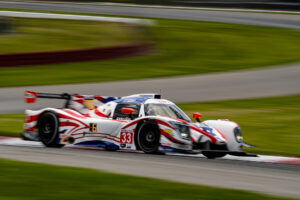 Drivers João Barbosa and Lance Willsey knew the weekend would pose a number of challenges for everyone in the 25-car field, but especially for the LMP3 class. Racing at Mid-Ohio emphasizes the balancing act required for the LMP3 field: staying clear of the quicker DPi cars while also managing the slower GTDs on the tight road course.

Race day began in the winner’s circle as the SCM team also fielded an entry in the one hour and 45-minute IMSA Prototype Challenge race, with their earlier generation Ligier LMP3. Willsey shared the wheel with Francesco Melandri, and the duo combined for an emphatic victory in the LMP3-2 class, taking the checkered flag with a nearly 60-second lead.

As the green flag flew on the main WeatherTech event later in the afternoon, Willsey – starting P4 – settled in quickly, posting times within a second of the leaders and maintaining pace. Pushing for more speed, he found the edge of the envelope on Lap 12 with a quick spin in Turn One. Staying on the paved racing surface, Willsey was swiftly back up to speed. 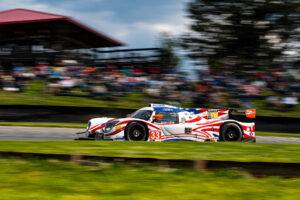 Willsey handed the wheel to Barbosa with just under two hours remaining, but unfortunately, the team was assessed a drive-through penalty for wheel spin while up on the air jacks during the stop. Barbosa worked hard to reach the class leader just ahead in order to get back on the lead lap but was beset by the aforementioned balancing act: dealing with a continuous wave of GTD cars, while being cognizant of the DPi protagonists coming through.

The team brought Barbosa into pit lane early in order to reset strategy, but the streak of bad luck continued, as a caution flag came out just as Barbosa and the class leader came in for service, thus removing the opportunity to get the lap back. The final 50-minutes of racing saw flat out green flag running and Barbosa was unable to regain the lead lap and took the checkered flag in fifth position.

“That was such bad luck, to have the leader pit at the same time that we did,” said Barbosa. “We couldn’t make our lap back and get back into contention. It’s frustrating for sure, because in a sprint race, anything that goes wrong will cost you. But the team did a great job all weekend and the car was good, so hopefully in the next one, we’ll have a bit of luck.” 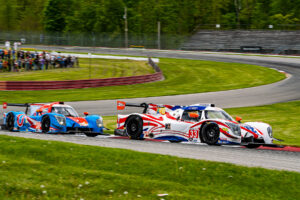 “We had a good car, but I struggled in that first stint,” said Willsey. “That dug a big hole that João had to try and dig us out of. He worked his tail off out there, but it was too tough a position. I feel badly for the team, because the guys did a great job and gave us a great car, it was definitely capable of running up front. We’ll regroup, we’ll think it through, we’ll figure out what we can do better and see what happens at Watkins Glen.”

“If we hadn’t lost the lap with the penalty, we’d have been right in the thick of it,” said team principal Sean Creech. “We rolled the dice to come in early on that pit sequence, but the leader came in as well, and then the caution came out. There are so many things out of your control, but that’s racing. Sometimes you have a string of bad luck, but good luck will come, we’ll keep plugging away. That’s why we keep coming back.”

Sean Creech Motorsport will return to IMSA action for Round Four of the IMSA WeatherTech SportsCar Championship/Round Three of the IMSA Michelin Endurance Cup at the Sahlen’s Six Hours of The Glen June 24 to 27.