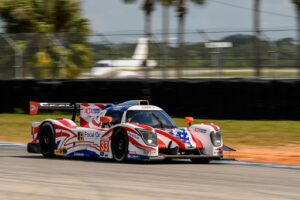 “It is special to finally win this race,” said Creech. “I’ve been here so many times and haven’t won it! We’ve been second at Daytona two years in a row and we just needed to get that last step.”

Drivers Lance Willsey, João Barbosa and Malthe Jakobsen combined to put the No. 33 SCM Exelixis Ligier JS P320 into the lead for 144 of 331 laps, overcoming early issues and an occasionally problematic clutch to earn the victory – the third Sebring 12-hour win for Barbosa but the first for Willsey and Jakobsen (in his first try).

Willsey took the wheel for qualifying, placing the No. 33 in seventh position on the  17-turn, 3.74-mile mixed concrete and asphalt racing surface.

There was action right from the drop of the green as several cars made contact, either with each other or the tire wall. Willsey made an impressive save in the race’s first hour when the back end of the Ligier spun around in the entrance of Turn 17 but avoided the wall and was quickly back underway. Driving a double stint to start the race, Willsey handed the car to Barbosa just after the two-hour mark a lap behind the leaders – and experiencing the first clutch issue that would follow them through the race.

Given the number of relatively minor incidents, it was impressive that the race remained under green, but an incident involving several cars near the three-hour mark packed up the field. Barbosa took advantage of the extended yellow to pit for fuel and tires, heading out on track ahead of the safety car and back on the lead lap.

Despite ambient temperatures hovering in the low 90s, Barbosa completed a double stint, with Jakobsen jumping in for his first race stint at Sebring. The Danish youngster wasted no time gunning for the front, making the pass for second and taking advantage of an off by the leader to take the lead with eight hours remaining and holding that lead throughout his double stint.

Willsey returned to the fray with seven hours remaining and fought through the challenge that the extreme heat presented to keep the car in contention, ducking into pit lane in fourth position.

“I’ve been doing this for 20, 25 years, and that was some of the toughest conditions I’ve been in,” said Willsey. “With the heat and humidity and no ventilation in the car, it was tough. In my first stint, the drink bottle wasn’t working, and with no yellows for over two hours, it was just attack, attack, attack. But this was just the antithesis of Daytona, where 32 degrees actually felt good. This was the hardest thing I’ve ever done!”

With Willsey’s stints complete, the final hours were contested by two drivers who, on paper, could not have been more different – the veteran Barbosa with two Sebring wins and the rookie Jakobsen seeing the legendary track for the first time.

Barbosa jumped in for his single stint, once again quickly putting the car back on the lead lap. Jakobsen jumped back in, heading out in third position – but that was not the plan for the 18-year-old phenom. He quickly reeled in second position, then put an impressive move on the No. 74 LMP3 in Turns One and Two to take over the lead. After two stints for Jakobsen, Barbosa headed back out, only briefly losing the lead as the clock reached the 10-hour mark. He fended off all attacks, coming into pit lane with 55 minutes remaining for the change to Jakobsen. The young Dane did not disappoint, waiting until the No. 30 Ligier made its final pit stop to take back the top spot. Jakobsen continued to build on that lead, taking the checkered flag clear by over 48 seconds. 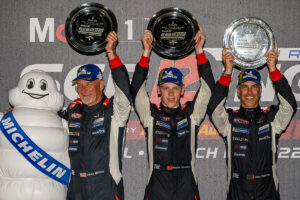 “This is my first time here, so I don’t know why I’m so quick, but it worked out today!” said Jakobsen. “I did a lot of simulator work and Joao was great about telling me all the small tricks. The car was great, and the driver and crew work was outstanding. Lance did a great job to stay out of all the early trouble, and Joao made up so much time, getting us back on the lead lap. When I jumped in the car, I was always in the top five and could work from there. I took it a bit easy early in that last stint, but when they let me push, the car was so good. It was so good to win here, especially on my first try!”

“This is a big deal,” said Willsey. “Quality class and extremely competitive so to win this year means a lot. I’m grateful to have these co-drivers, and a great crew. Fuel and tires for 12 hours and we’re in the winner’s circle!”

“This was such a tremendous effort from the entire team,” said Barbosa. “The car ran so well. We had a slight clutch issue but the team has done such a great job with the car that we were able to deal with that. Everything went according to plan, the team made all the right calls. This is one of the coolest races in the world to win, especially on a tricky day like today. It was flawless work by the crew and the drivers. I can’t say enough about the job that Malthe has done – he’s only 18 years old, but he has a very bright future ahead of him. Lance did a great job in his stints, and we brought the car home without a scratch. We have great partners, with Focal One and Alta Equipment, supporting us and I’m glad they were here to celebrate!” 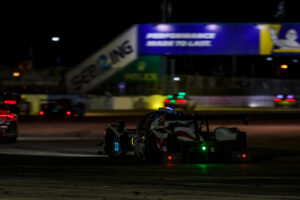 “This is a tough place to survive but we did it today,” said Creech. “It’s a great start to the season, to come away from the first points race with the lead. We have great drivers and an awesome crew that did a great job with the car. Now, we’ll go back to the shop, go through everything, do some testing, and get ready for Mid-Ohio!”

SCM would like to thank their partners for the continued support, including Exelixis, Alta Equipment and Focal One.

Next up for Sean Creech Motorsport will be the first sprint race of the year, the two hour and 40-minute Mid-Ohio Sports Car Challenge at the Mid-Ohio Sports Car Course. The race will be broadcast live in the U.S. on PeacockTV and USA Network, while international viewers can watch via IMSA.tv. IMSA Radio will also be available at IMSA.com.

Team leader Sean Creech has competed in a multitude of sports car series from 1990 until the present day, including Group C, IMSA GTP, WSC, Grand-Am, SRO World Challenge, and IMSA. SCM will contest the full WeatherTech SportsCar Championship in 2022 with João Barbosa and Lance Willsey.