LEXINGTON, Ohio (15 May 2022) – Sean Creech Motorsport (SCM) came into Sunday’s Lexus Grand Prix of Mid-Ohio as the WeatherTech SportsCar Championship’s LMP3 class points leader, and while the team had an unlucky start to Sunday’s race, the sixth-place result doesn’t tell the entire story.

The team, with drivers João Barbosa and Lance Willsey, tested at the Mid-Ohio Sports Car Course late last month – but in unseasonably cold and rainy conditions that yielded little in the way of usable information. The team built on the No. 33 Sean Creech Motorsport Exelixis/Focal One/Alta Equipment Ligier JS P320’s setup through two practice sessions, settling on what they hoped would be a solid foundation to build from through the two-hour and 40-minute event at the 2.4-mile Mid-Ohio Sports Car Course. 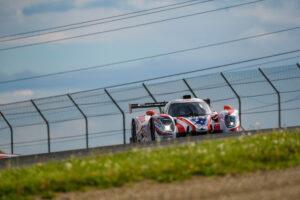 Taking the green flag in eighth position, Willsey immediately found himself in a game of bumper cars, as multiple cars around him bounced off each other – and off his own Ligier. Willsey maintained his composure amongst competitors, traffic and the faster DPi prototypes. But late in his stint, one of those GT cars tangled with a lapping DPi in Turn Nine and put Willsey into the grass – and a lap down. Once he knew the car was undamaged, Willsey was swiftly back underway, holding his own and keeping the car in seventh position.

Pitting with just under two hours remaining, Willsey handed the wheel to Barbosa, who has three podiums (including a victory) at Mid-Ohio. Barbosa immediately made his presence known, setting a team-best lap time of 1:19.058 despite being a lap down to the leaders.

A full course caution with just over an hour remaining sent the team on an alternate strategy: with the leader having the good fortune to pit just before the yellow, there would be no pass around to get the lap back. Team strategists brought Barbosa in for a top-off of fuel and four new Michelin tires. But he returned to the fray in the middle of the pack of LMP3 cars, unable to break free with all six running comparable lap times. The yellow they’d been hoping for never materialized and Barbosa took the checkered flag in sixth position. 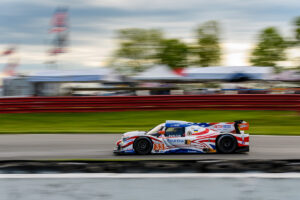 “It just wasn’t our race today,” said Willsey, who also contested the IMSA Prototype Challenge race earlier Sunday with co-driver Parker Thompson. “But this one’s on me, starting P8 just in front of the GTD cars. Things got really backed up ahead of me, and one of the LMP3 cars spun, so a couple of the GT cars were able to get around. Then, while trying to get around them, one of them put me into the dirt – and that put us in a hole we couldn’t get out of. We don’t come here to finish sixth, but the team did a great job and we had a good car, a podium car if things had gone our way. Huge thanks to Alta and Focal One for all their support, we’ll regroup and be maniacally focused on the Glen coming up!”

“The overall speed wasn’t there but we had a very consistent car,” said Barbosa. “I’m pleased with my stint: we stayed with the top guys in the class for a long time, even quicker at times. The pace was there but it was a tough sequence of events early in the race – it’s hard to come back in a sprint race. We struggled here last year as well, I guess it’s just not our track. We struggled all weekend for grip – these track conditions were so different than they were at the test so it was difficult. The team will dig deep, figure it out, and we’ll come back stronger at the Glen. We’re still close in points and the next few tracks will be good for us. We know the championship is still wide open.”

“We tested here a few weeks ago and we had we were really fast car, but this weekend the conditions were different so it didn’t translate well,” said Creech. “But we got the car dialed in through the race so during João’s stint, we were running similar times as our competitors. It’s just in the beginning of the race, we didn’t have that. We made some adjustments through the stops and had a pretty good car in the end. While we didn’t finish where we wanted to, I think we’re still close in the points. That was the main thing – coming out of here with good points and with the car in one piece. And there are still a lot of races to go. We’ll test it at Glen in early June and just start over again, like we always do every weekend. We’re the circus!”

Next up for Sean Creech Motorsport will be the third endurance race of the season, the Sahlen’s Six Hours of The Glen at Watkins Glen International Raceway. The race will be broadcast live in the U.S. on PeacockTV and USA Network, while international viewers can watch via IMSA.tv. IMSA Radio will also be available at IMSA.com.