Drivers João Barbosa, Lance Willsey and Malthe Jakobsen showed the No. 33 SCM Exelixis/Focal One/Alta Equipment Ligier JS P320’s pace throughout the weekend, but early contact in the race sent the team to the garage for repairs. Outstanding work from the team saw the Ligier return to the track and finish sixth, gaining valuable positions and points despite a weather-related red flag that halted their progress.

The team came into the weekend third in LMP3 points. As the winners of the previous Michelin Endurance Challenge event, the Mobil 1 Twelve Hours of Sebring, the team had high hopes for the six-hour endurance classic. 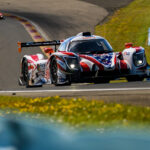 The No. 33 Ligier was immediately quick, setting the fastest LMP3 lap time of the weekend, with a lap of 1:39.669 in Saturday morning’s second practice. But a penalty for working on the car in pit lane during qualifying relegated the team to the final spot in class, though they started 10th when the car in front received a pre-race penalty.

Willsey took the green flag and commenced the LMP3 class battle from the outset. Running competitive lap times and focusing forward, Willsey found himself in the middle of a four-car train just before the one-hour mark, with the lead car allowing the leaders to gain ground. Willsey saw the No. 36 ahead go wide and made a move on the inside to pass, but the 36 held his line and Willsey’s momentum carried him into his competitor’s right rear wheel. Willsey spun and though he was relatively undamaged, the car would not restart.

The team worked feverishly on the Ligier back in the garage, analyzing every inch of the car’s electrical system to discover an overheated starter, and within an hour had the car back on track with Barbosa behind the wheel. The two-time Sahlen’s Six Hour winner steadied the ship, putting down solid laps before handing to Jakobsen with just over three hours remaining. Jakobsen put in an impressive stint, setting the team’s quick time of the race, a lap of 1:41.463 on lap 89 of an eventual 132. The young Dane handed over to Barbosa at the two-hour mark.

But with just under 90 minutes remaining, Mother Nature intervened. Lightning in the area brought out a red flag, with teams battening down their pit lane setups as heavy winds and rain rolled through the area. The race once again took the green flag with just 21 minutes remaining, but it was enough for Barbosa to gain enough laps to secure sixth position – and the valuable points. The team now lies in fourth position in the LMP3 team standings.

The team would like to thank partners Alta Equipment Company and Focal One for their continued support.

Lance Willsey: The most frustrating part was that the team gave us a really, really good car. That’s why I was so impatient at the end of that four-car train, the leaders were getting away from us. I thought I had space behind the 36 car, who I thought was having brake issues, and I don’t think he saw me. It was just enough contact to spin me and overheat the starter. All hands on deck in the garage – it was a heroic effort by the team to get us back out there to move up the leaderboard.”

João Barbosa: The team was able to resolve the problem quickly but unfortunately, the incident took us out of contention. The team kept digging: every point is important – we’re further down the standings than we’d like but who knows if these points will make the difference. It’s a shame, the car was so good all weekend and the team did a great job. The track was fine after the red, the car felt great, but I didn’t want to get in the middle of cars fighting for position, especially with such a short turnaround – we’ll dig into exactly what happened with the starter but the car is in one piece and we’re looking forward to our return to Canada. We have a good baseline setup that should work well at CTMP.”

Malthe Jakobsen: “It was fun but it was hard once we had the incident. The team did a really good job to get us back out. It wasn’t too many laps this time, because of the red flag, but that’s how it is sometimes!”

Sean Creech: “The team did a great job. It’s unfortunate that we had the incident and the resulting starter issue. It appears to be a weak link in the Ligier, some teams in ELMS (European Le Mans) have had this same issue. The team diagnosed it quickly and got us back out to salvage more points. This class is so competitive, you have to get every point you can. That’s why you work so hard to get back on track – you never know what’s going to happen.”

Next up for SCM will be the one-hour and 40-minute Chevrolet Grand Prix at Canadian Tire Motorsport Park, which takes the green flag Sunday at 3:05 p.m. The race will be broadcast live in the U.S., in its entirety on network NBC and Peacock TV in the US, and on REV TV in Canada. International viewers can watch via IMSA.tv, with IMSA Radio also available at IMSA.com.